The United Nations has been an absolute failure from Day 1, because the Security Council, which is the council which authorises actions around the globe, gives each of its 5 Permanent Members the right to veto any action.

These are the 5 Permanent Members of the UN Security Council:

The United Nations was set up after the 2nd World War in 1945, as a body to mediate any conflicts around the world, but as long as these 5 Permanent Members have veto powers, then each of these countries can use their veto powers for their own self-serving purposes.

The only thing stopping some of these possible conflicts is the North Atlantic Treaty Organisation – NATO.

If one member is attacked then NATO can take action against the aggressor nation.

The problem right now, is that Ukraine has been invaded by Russia. Russia has veto powers on the UN Security Council, so no action can be taken against it. The other problem, is that Ukraine is not part of NATO, so NATO cannot take any action.

There are 2 things that need to be done to fix the United Nations:
1. Only democratic countries should be allowed to join.
(This would then exclude communist countries, dictatorships, and monarchies.)
2. The veto powers should be abolished, and every country should have only one vote.

Until then, the United Nations will continue to be an absolute failure and a waste of money.

For the past decade the Communist Party of China, has been buying up Hollywood studios. Look at the opening credits of any new Blockbuster movie, and you will see the Communism invasion of Hollywood.

Now, do not get me wrong. California in general, in my humble opinion, is the worst state in the USA.

According to one recent study, California is the worst-governed state in the entire country. It now boasts the highest state income tax rate, and the highest sales tax rate in the nation. The number of people unemployed in the state of California is roughly equivalent to the populations of Nevada, New Hampshire and Vermont combined.

Where there is power and money, you are guaranteed to find all kinds of immoral activities, from drug use to corruption.

So, why would anyone be surprised with Hollywood selling itself out to Communist China?

To the world Communist China wants you to believe that they are good people, but their human rights record has been appalling for decades.

Look at the next movie blockbuster coming out of Hollywood, and besides the token Chinese actor, or actress, you will see Chinese directors and Chinese producers.

So they have now infiltrated the world with their products, purchased politicians, and now they want to skew your views of them through the movies that you watch!

Leonid Nevzlin, a Russian-born oligarch and former oil tycoon fled for Israel nearly 20 years ago, when charges were brought against him by Putin’s corrupt regime. This is the story of most of the wealthy Russians, because Putin needs their wealth to feed Communism.

These are his words:
"Russian citizenship has already become a stamp of shame on itself, which I no longer want to wear on myself," he wrote. "I can't afford to be a citizen of a country that kills children of other countries and tortures their children who don't agree with it. I am against the war. I am against the occupation. I am against the genocide of the Ukrainian people."

"I was one of the first to be hit by Putin. He threw my friends in jails, and killed some of them."

"The regime will change, no doubt about it. Before it might have taken 10 or 20 years from now, now they happen much faster. Ukraine has found his Achilles heel," he said. "He had been playing this alpha male who never losses. Now he is clearly experiencing military defeat."

The Russian people who voted for Putin, are responsible for the actions of Putin’s brutal regime!

The Russian Federation was born in 1991 when the Soviet Union (USSR) was dissolved.

In 2020, a new law was added to allow an existing president, the opportunity of 2 additional consecutive 6 year terms.

Putin is almost guaranteed to remain in power until 2036.

I always say - “People always get what they vote for.”

(All details come from the Wikipedia article, and exclude all details of fraud, vote rigging, and corruption.)

Allies
USA, UK, USSR, China, and the rest of the world.

Allies
The rest of the world.

If You Can Fight - Fight!
Help Each Other!
Be Prepared For Anything!
Our War Has Just Begun!
- World War Z

31 January 2020
The USA, under President Donald Trump, declared Coronavirus a Public Health Emergency.
- issued 14 days quarantine rules for US citizens entering the US from China
(mandatory if entering from the Hubei province).
- issued an order to deny entry to foreigners who have traveled to China within the past two weeks.

27 August 2021
Statement by President Joe Biden on the Investigation into the Origins of COVID-19
"Critical information about the origins of this pandemic exists in the People’s Republic of China, yet from the beginning, government officials in China have worked to prevent international investigators and members of the global public health community from accessing it. To this day, the PRC continues to reject calls for transparency and withhold information, even as the toll of this pandemic continue to rise."

To put the worldwide death of 6 million people, over 2 years into perspective - This is the number of Jews who were killed by Nazi Germany in World War 2.

China has taken NO responsibility for unleashing this deadly disease on the world!

We know that China has no conscience in killing it's own people, but where is your conscience?

These countries continue to import Russian oil and natural gas. They are complicit in the war crimes of Russia, and the War Criminal Putin.

From today, I will boycott all products from these countries. Do you want to continue to fund the
Russian War Machine? 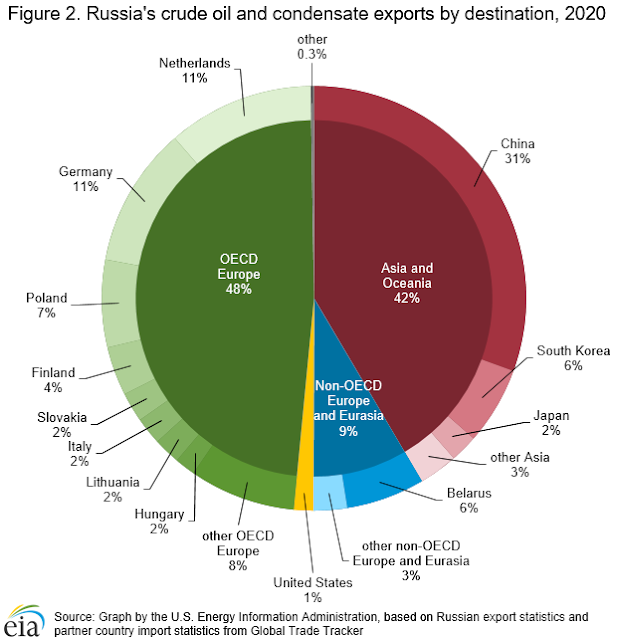 It is easy to get distracted by Russia’s invasion of surrounding lands, but China has been doing it since 1949, and North Korea wants South Korea.

The difference between these 3 communist countries and Germany, is that Germany was led
by a charismatic leader, who inspired his people to support his plan of territorial expansion.

Russia, China, and North Korea do not have charismatic leaders, but only lowly dictators.
Remember what happened to the lowly dictator Saddam Hussein?

What these leaders do not realise, is that when they are gone, their actions will be reversed, and
these lands will become independent again.

The world is now closing its doors to Russia.
It is time to do that to China.
If you stop buying Chinese products, China’s overpopulation will cause it to implode!
If you continue to support it, you will funding it’s military!

In 2016, we the English people and some of the rest of the United Kingdom, voted to leave the European Union. We did that because we are a people of courage and integrity. We were tired of bureaucrats in Brussels overruling our decisions and our laws. To us a Principle is far more important, than the consequences.

In 2020, the world looked at the USA in horror as the greatest corruption in a Presidential Election took place. People of Conscience around the world stood with the Americans who were deprived of a free and fair election. A corrupt politician, Biden, was elected and the World Press brushed the corruption under the carpet.

In 2014, Obama and NATO handed over Crimea to Russia, and now in 2022, Biden and NATO are handing over Ukraine to Russia.

The world thinks that the only illegitimate governments are those of Russia, China and a handful of African countries, but every country that stands by while Ukraine is taken over by Russia, is just as complicit in the Russian actions.

So for the few of us that have a Conscience, and refuse to watch the Winter Olympics in China, or refuse to purchase Chinese products, we will continue to speak out of the injustices in the world.

For many years, I have been relatively quiet about things that have being going on in the world.

I am a man of conscience.
That simply means that I know the difference between what is right and what is wrong.

For those of you out there who think that the Truth is subjective, then you have never encountered the Truth.

The Truth, is just a fact.
A fact that does not need a third party to confirm it.
If I point to the blue sky, I know that it is blue, and I do not need someone to confirm it for me.

Satyakāma is a Sanskrit word, which means Lover of Truth.
I hope to be able to shine light on the truth in our world.